After receiving an email from a friend, I am pretty excited to find out the Bryan Special has become a regular menu item and lived on past my time in Shanghai. Here is a link to my post 2 1/4 years ago about the creation of this sandwich. 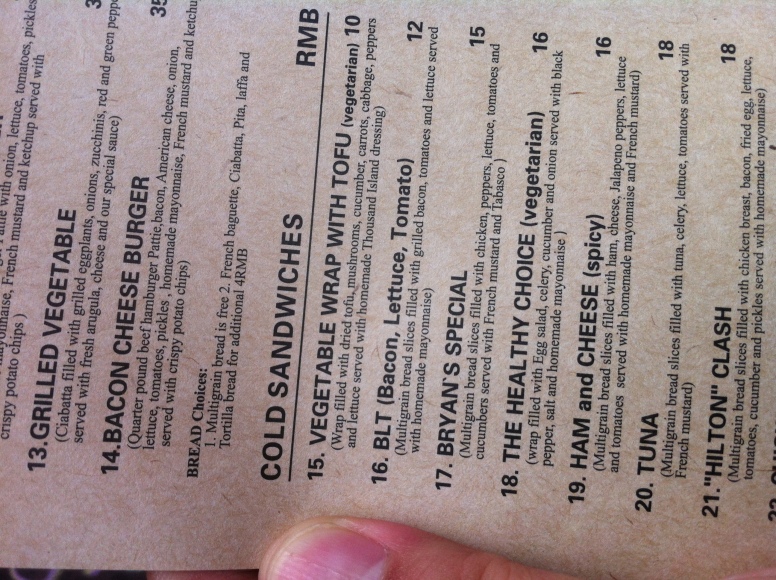 Today at a small sandwich stand in Shanghai called Sarnies, the store employees unveiled Bryan’s Special. My sandwich is chicken breast, fresh vegetables, mustard, and hot sauce served on wheat bread. After reading the ingredients, you might ask “What’s so special?” So here is the story…
I am a frequent customer at Sarnies because it’s next to my office and provides healthy food at a good price. Even after constantly telling them no mayonnaise(méi yǒu dàn huáng jiàng), the sandwich artists would like second nature always be just about to add it before I scream out, “méi yǒu dàn huáng jiàng”. If I did not watch the sandwich production like a hawk, I would most likely get a sandwich with mayo. Then, I decided to name my order, “Bryan’s Special” to consistently get my sandwich without mayonnaise.

For months, I had joked with the manager at Sarnies about making the poster, and yesterday I finally gave them a 11×17(A3) poster for Bryan’s Special. I don’t know if it will stay up longer than a week , but I am curious to see how many people besides me order it. Even if it only stays up one day, I still think its pretty cool.

Yes, I live in China, but I do miss American Chinese, especially the Orange Chicken at Panda Express. It’s not something I eat too often, but I will always have a place my heart for Orange Chicken. Below is some background I got from watching the Ted Talk by Jennifer 8 Lee, reading an article she wrote on fortune cookies, and some other internet research.

Here are some interesting from her talk:
• There are more Chinese restaurants in the US than the combined number of Burger King, KFC, McDonald’s, and Wendy’s(over 40,000)
• The Cuban Missile Crisis was resolved at a Chinese Restaurant in Washington D.C. called Yenching Palace(Assuming aspects of the statement are true)
• NASA offers Sweet and Sour Pork as a meal option in space
• Chinese Food is available on all seven continents including Antarctica (Monday night is Chinese at the McMurdo Station)
• 3 Billion Fortune Cookies are produced each year (mostly in the US)
• The Philadelphia Cheese Steak Egg Roll sounded pretty interesting

General Tsai’s Chicken started out in a Chinese Restaurant in the New York in the 1970s invented by a Taiwanese Chef. Funny enough the original chef cannot recognize way the dish is commonly is cooked today.

“Chopped, battered and fried chicken pieces coated in sweet orange flavored chili sauce” does not give the dish justice. After some research, most websites consider Orange Chicken a variant of General Tsao’s Chicken.